While this is clearly opinion, there are times that seem that way.  Maybe it is because the more I write, the more I like a challenge when it comes to building worlds and stories. Taking two ideas that have little to nothing in common, and combining them to see what I can come up. I doubt I’m the first to arrive at this conclusion either, as traditional literature and graphic novels reflect that. Whether it be traditional novels like The Shannara Chronicles, Her Majesty’s Dragon, 11/22/63, and others. Even in graphic novels, this is more apparent as series like Saga, The Surrogates, Cancertown, Monsteress, and more. Both sides taking elements of fantasy, science fiction, horror, detective stories, and other genres, combining them and building spectacular stories in the process.

Does anyone else agree, with this trend? Do you disagree? Let me know what you think, in the comments below.

As I was working on one my  Steampunk/magic concept story, I began to realize this would be something I would have to consider as I build the world. While the question may seem like a paradox in the making, there are ways to work around it. Making everyone have innate magic capabilities, but their natural potential for it differs. Allowing me to do two things that contrast and complement each other.

The first being a symbolic/rune-based magic with everyday machines. Creating objects with an internal charge, that can be activated with a specific phrase.Forcing the notion that magic is a common idea, that a world can be built around both it as the technology of the world changes.

Yet at the same time allowing the creation of extremely personalized weapons, and other items that work on the principal of a genetic/magical signature. That can be used with or without a phrase. Which complements and contrasts vastly with the notion of magic being commonplace.

Given how oddly well those two ideas seem to work together, the issue now becomes about potency.  However, that seems to be the reason these two ideas work together. Those that have a higher potency for magic will get more training and tutoring in learning how to use their magical capabilities. While those that have lower potentials, get the basic knowledge they can use in their everyday lives. Creating a system that forces both to cooperate with each other to keep their civilization working.

Does anyone else agree with me, on this notion? Should it work despite the contrasts? Please comment if you have anything to say.

After 15 days of writing 8 paragraphs split between two increasingly large short stories, I have realized something. My ability to write short stories is limited unless I have a word or, page limit for it. Which is either practical or a tremendous hassle for me. Given my desire to publish a physical novel. Yet it does have its practical purpose if I would want to do a serial, or annual installment in a story for a magazine or anthology. It is an oddly vexing contradiction within the nature of a being creative I think. Do you limit the scope of the story, or do you allow yourself to fulfill its full potential?

Outside of that slight paradox of frustration, and inspiration writing is going well most days. I have struggled a few days in this routine due to a mixture of sinus problems, mind-grains, and mental stress. On those days I try to at minimum do a paragraph in both stories just to keep the creative juices flowing. Usually, the day after if I’m feeling clearer, I double the goal to sixteen paragraphs plus whatever didn’t get done the previous day.

Given now that the busy season at work is beginning, I have decided to write six paragraphs a piece in both stories. Since writing at work may pose to be almost impossible when work is busy. It seems to be a rational step forward, instead of doubling the 8 paragraphs to 16 paragraphs in both stories. I would prefer to avoid writer’s block or a mental burnout.

The more I try to write when my heads want sleep, makes me wish I could write in my sleep. Imagine how productive that would be. The writing may seem a little nonsensical and difficult to read, but the thoughts would be interesting to read in the morning. Maybe even good for the occasional laugh in the morning, when you wake up.

Well after going to a large outdoor/indoor flea over the weekend, I began to realize a large majority of my books come from flea markets, discount stores, or library sales.I rarely purchase a book when it first comes out in hardback or paperback.  Honestly I have no problem buying books that are used but in good condition. Especially if they are cheap, haha. I would say a large majority of writers, are constant readers and surround themselves with books. Personally I love get lost in a fictional world. It gives you a sense and feeling  of exploration without ever leaving your home. Maybe that is why books have been around so long as a medium of entertainment.  Despite the fact that the availability and delivery of the medium has changed, as technology progresses.

Below are some of the purchases I made Saturday. 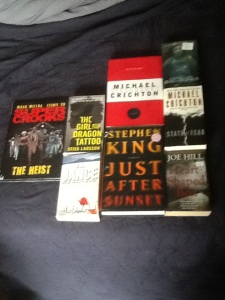 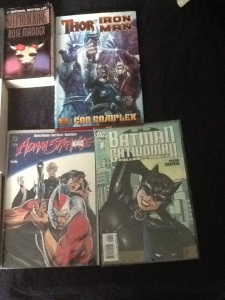 Has anyone else picked up good books from flea markets? Library Sales? Discount stores? Comment below if you have. I will admit to a healthy curiosity, to see if anyone does the same.

Well over the past few days I have written 5,000 words in Rise (death and a dragon), and a few hundred in anarchy since my mind refuses to leave the fictional realm of Talora. Even  though the more I write the more I realize am I approaching the climatic middle of the book. Which means I should probably update the few chapters I put on wattpad. Almost forgot about that, haha. Still trying to figure out how exactly it works but it is what it is. Even though I have thought on going to the local con, next year once I get published, and have a physical product to market. Maybe do drawing for a autographed copy. Not much else to report, unfortunately.

As as I think of setting up other social media pages dealing with my beginning as author. It feels like Facebook would be the most efficient, over Google+ since it’s easier to access to the masses. Google+ is really only works if your fans have a google account. Of course there are other sites like goodreads, and tumblr which seem  more public than Google+. The question which is the easiest to communicate with a fan base, outside using a traditional website. Any other authors I follow, have thoughts on this. Comment below.

Well after updating my character sheet for Rise (death and a dragon), I was astonished to see I had so many main characters.  I never thought I would have 21 main characters and I still haven’t even finished the novel.Not to mention 25 minor characters, and most likely more to come. There are a a few places, I still haven’t written about. I have mentioned them but haven’t written about them. Apparently my subconscious is trying to make my George R.R. Martian. I’m not sure if I should be impressed or annoyed, by that. Well I guess there could be worse things my subconscious could be doing.

I guess that means its time for a update and a minor observation I noticed as I write.

Progress goes decently well in Rise, but a little slow at times. I haven’t broken 70000 thousands words, but that should be done by the beginning of May. My other project Anarchy is a slow start since my primary focus is on Rise at the moment.

I have started to realize the more I write, the more a writer has to have a slight insanity and a lot of passion. Of course that means even a greater amount of drive, to write, to hone their craft. Now as a writer I understand the quote said by Henry Rollins, “You need a little bit of insanity to do great things.”  This quote can be applied to many different vocations. To me the quote can easily and without question be applied to authors, no matter the genre.