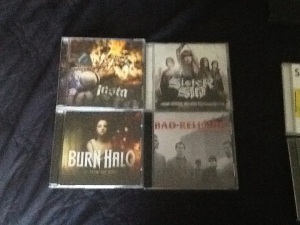 In my first post for the Cherished Blogfest, I talked my love of music. For my second post I’m continuing that theme, but for different reasons. Some of it is the memories that I associate with discovering some of the bands, or memories of who gave me the CDs, or some of the friendships I have developed with people all over the world. Take the Bad Religion cd, Stranger than fiction down in the lower right corner. One of my close friends from high school introduced to the band, and let me borrow his copy of the album. After one listen I fell in love with intelligently written lyrics and the band as a whole. Every album made by the band shares a sense of intelligence with the lyrics. I ended up buying the album for myself, it’s that good. 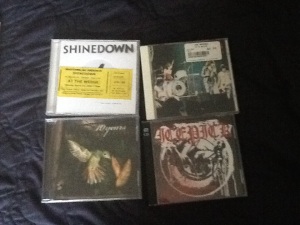 The two albums in the picture to the right of my text, on the left hand side both have a story behind them. Looking back at the first time I heard the band 10 years, (lower left corner) I was with my dad seeing them in concert with Korn and Mudvayne. I recall picking up the album less than a week later, after seeing the band live. The album above it, (Sound of Madness by Shinedown), has a concert ticket in it. My father, my sister and myself went to se them live. While I may not always get along with them, it is still a enjoyable memory. Even the Ramones album was a gift from my mom. It is still one of the best live albums I have ever heard. 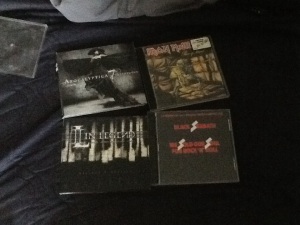 Now onto the last picture of CDs. Like all the others these albums share a special place in my heart. Both the Black Sabbath and Iron Maiden albums were gifts from my dad. These albums were released before I was born, but they individually some of my favorite albums.  [Tangent: I actually met (well sort of) one of my closest friends through our mutual love of Iron Maiden and metal music online. After three years of getting to know her, she is one of my closet friends and one of the few who gets a sneak peak of stuff as I write.] The album in the lower left hand corner, Ballads n bullets by In Legend was another gift from my mom. However both albums pictured in the left side of the photo, take a slightly untraditional root for their music. Both use orchestral instruments in their music, giving their metal a neoclassical sound. The mix of albums I choose may seem like an odd combination, or even the genres of the band who made the album my seem strange to some people.  I will admit one of my favorite things about being a metal-head or a punk rocker, is this sense of community or family if you will, that comes with being a fan. While it may not be a tangible thing, I have met several friends that way. Sometimes in person, sometimes over the internet. The friendships may seem strange but I still cherish them. I doubt I will ever meet some of them in person, but I would still call them friends. This post is dedicated to them, and the music that made us friends. 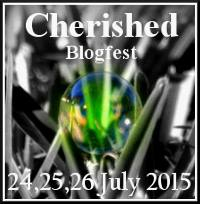 Ever since I signed up for the Cherished Blogfest, I was trying to figure what object to pick. After almost three weeks of thinking on what to pick, I realized I was overthinking it.  The object I decided to feature was my iPod. I have owned since my freshman year in college. As a self professed music junkie. I choose the 160gb version in black. 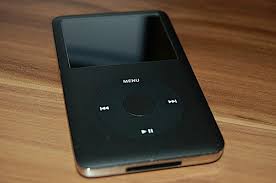 It is almost always on, giving my life a soundtrack. After almost five years, it has 39,000 out of the 40,000 songs that can be put on it. Which after five years doesn’t sound as impressive as it could be. I could have purchased the iPod Touch instead but I wanted the storage over anything else. Yet I wouldn’t trade or think of selling it since they no longer make it.

Even though people say I may don’t look like a metal-head, or a punk rocker, or a fan of neoclassical guitar, or a hard rocker. Honestly it is an amusing to see their reactions when they realize that. I will admit music maybe the only thing I love as much as the written word. Hmm…what else can I say? I guess I could reveal some of my favorite bands.

I Found My Friends: The Oral History of Nirvana by Nick Soulsby
My rating: 5 of 5 stars

I really loved this book.This takes the idea of oral history, usually used to tell fables and applies to Nirvana. It is well detailed including the early years before Nirvana settled on a name. While focusing heavily on Nirvana, it also talks mentions other bands like the Melvins, Screaming Trees, Soundgarden,Sonic Youth and so many others that were part of the “Grunge” scene. If you like Nirvana, you will thoroughly enjoy this book. It also contributes to the history of other lesser known bands with tragic stories, who never grew to the fame of Nirvana. The only thing that could of made this better is if it came with a soundtrack, for all the bands mentioned including Nirvana.My only minor complaint is it doesn’t have excerpts from the point of view of the remaining band members Dave Grohl and Krist Novoselic. The only reason I could understand doing this is maybe they were too close or the author wanted not to taint the story by adding blurbs from those who in Nirvana itself.
I received this book via a Goodreads Giveaway.