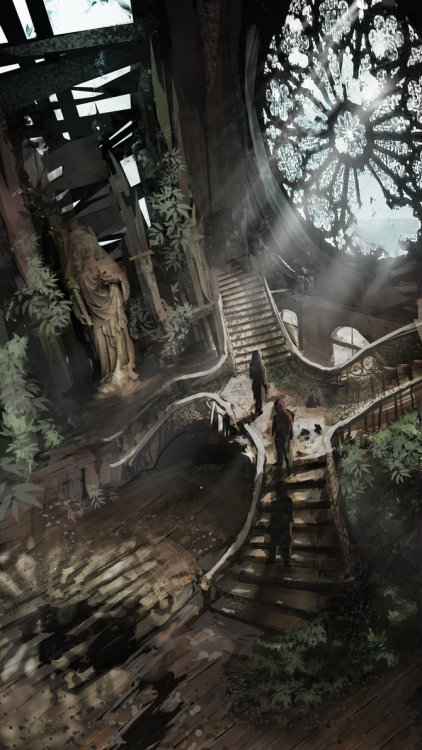 Vines crept in through the broken window, dropping down like an organic rope.  The light from the sun revealing the broken floor and rotten crumbling. Nature had taken parts of this church back following the Gaea event. Yet there was an odd silence that hung in the air. Following the careful steps of my companion Milton down the rotten looking wooden stairs. Hearing the occasional creak as the three of us descended the staircase. Pausing as something rustled in the dark green brush near us. With quick glances at each other, we ran taking tactual positions in the area. Aiming our rifles at the bush, our hands shaking with a mixture of anticipation and fear. Watching the bush through the sight of our guns. Listening to something growl from the bush. Setting the barrel of my rifle on the banister staircase, before feeling around for something to toss at the bush. Managing to grab on to something that had a rough texture. Hurling the item at the bush, attempting to draw out what was hiding in the bush. Quickly putting my hand back on my rifle as the object flew through the air.  Watching a blur of movement as something caught the brick in mid-air.  Slowly the beast crawled forward, revealing long skinny dark green legs that pierced the floor. Milton glancing at Alex and myself before giving us a slight nod, the three of us know the danger of an Archanis. Within seconds all of three of us opened fire, breaking the sacred silence of the old church. Watching in horror as the Archanis continued to crawl forward, emitting a deep growl in the process.  Revealing the organic layer armor, the covered its body. The twisted face of both the human and the spider staring out at us layers of white eyes. A small gold chain with a small cross still hanging around its bent neck. Holding onto a remanent of its former life like it was still human. Launching its entire body forward into the rain of bullets, almost like it wanted to die. Continuing to fire my rifle until I saw the thing had stopped moving forward. Its body twitching and spurting out a thick dark fluid that could have been the thing’s blood. Staining the area around for a few seconds before turning the ground a soft green color.

Quickly doing the same before the body could begin emitting lethal spores. Noticing Milton do the same seconds prior to the body releasing small lethal white spores into the air. Being careful moving around the corpse, we walked down the stairs. Pressing down on the plastic clip on flashlights, letting the light cast itself in front of us. Glancing around for anything else was hiding in the nearby foliage.

I shouted through the mask “Finding anything else that can kill us, or should we begin looking for supplies?”

Milton yelled back “Not yet, Jess. The supply cache I heard about is supposed to be in the far back of the church,” turning towards us. “I think the door should be around here somewhere, keep an eye out for it,” pivoting on his feet before resuming his walk.

Alex fell in behind him, leaving me to take up the rear. Walking backward slowly, scanning the plant life with the sights of my rifle.  The wind begins to pass through and down the open window some in the process.  Almost making me fire my weapon as the plants moved.

Milton shouted “Damn it the door is jammed. Alex help me try to force the door open, Jess watch our backs.”

Nodding I stopped walking, observing the plants.  Hearing Alex and Milton slamming themselves into the door. Listening attentively to something moving, trying my best to ignore the creak of the something being pushed back from behind me.  Continuing my watch for several minutes before I heard a series of loud bangs behind me. Pivoting quickly on my heels I saw they had opened the door. Forcing several boxes to collide with the ground in the process.  Pausing midstep once I heard a large monstrous growl, that sounded terrifyingly familiar.

I shouted “We should get moving if my gut feeling about what heard is correct,” reaching for something a little more explosive I packed for this trip into the ruins.  Feeling around before pulling out an old wine bottle filled with a mixture of alcohol and gasoline. “Grab anything light and salvageable you two,” peering around the room quickly for signs of movement.

The ground beginning to shake under my feet a few minutes later. Hearing Milton curse under his breath, as him and Alex shoved stuff into their backpacks. Sprinting to the staircase with all the energy I could muster, trying to find higher ground. Seeing out of my peripheral vision Alex and Milton quickly following my lead. The frequency and ferocity of the ground shaking rapidly increasing. Managing to drop large pockets of dust down from the ceiling that sparkled in the sunlight.

Milton taking control back by testing the strength of the knot and rope we used to get in here. Alex and I kept a tight watch on everything as the ground continued to shake. Noticing something was pounding hard on the large arched barricaded door at the back of the church, trying to force its way in. Lighting the Molotov cocktail with a matchbook, before tossing it hard at the door. Watching the door begin to burn as Alex climbed down the rope first. Milton followed behind him a few seconds later. The door being broken forcing large shards to fly through the air, as the monstrous Behomethes entered the room. Knowing I wouldn’t survive long even with the flames delaying that abomination, I reached for the rope. Tightening my grip before starting to descend down. Keeping my gaze straight ahead as a precaution incase the Behomethes tried to follow.

2 thoughts on “Another picture is worth another thousand words”